Often stated as self-discipline or willpower, self-control touches us in every private and public spot.

We all want to be in control of our urges, our tongue, our pocketbook — our life. Even Cookie Monster from the Muppets is working on his self-control, changing “Me want it!” to “Me wait for it.”

We try to apply self-control to our health by eating right, exercising, and avoiding addictive substances like alcohol, drugs, chocolate, and sugar. From getting and staying organized to focusing on work and maintaining finances, we set ourselves up for failure in the area of self-control. In fact, scientists are discovering some key facts about self-control.

Research shows that after making big decisions or a string of important decisions, our self-control is weakened.

If we deprive ourselves in other ways — such as eating a minimal breakfast and no lunch — and then face a tough day of repeated decisions, our self-control about eating declines, and we can’t resist dessert that evening. Or if we stand strong against harsh stressors, we lose restraint and begin sleeping too much, spending too much, or talking too much.

What steps do psychologists suggest so we can avoid the trap?

1. Keep your blood sugar levels balanced throughout the day by eating smaller meals more often during the day.

2. Override habits such as not spending on small items during the day. In other words, pass on that latte or Danish.

3. Deliberately turn off the TV during your favorite show so that you are not a slave to it.

4. Try eating with your right hand instead of your left or vice-versa.

5. Remove the temptations, such as unhealthy foods that entice you, or put your cell phone in a drawer at a certain time each evening.

6. Throw away your to-do list. Instead, schedule every job for a day and time.

Some experts blame distractions for ruining our ability to stay focused and control our day. New apps have been built to help us avoid these distractions. Activate the app and you will not receive any notifications from email or social media for a set period of time. These gurus think that stopping the diversions will solve the problem.

As believers, we know that self-control is ultimately God-control. The result (fruit) of God’s Holy Spirit living in us helps us delay our impulses for a greater purpose.

For the Love of Britain Cottage Pie by Penelope Carlevato

Here is a recipe that is simple and good. My British friend Margaret gave me this timesaving recipe. It is very similar to Shepherd’s Pie which is made with lamb. Left-over roast beef, cut into small pieces, instead of the ground beef may also be an option. In England, hamburger or ground meat is called minced beef. 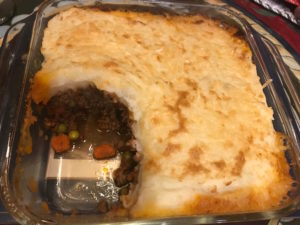 1/2 teaspoon Marmite or Vegemite (this is optional, but can be found in specialty stores)

4 ounces chopped tomatoes (can use canned)

In a frying pan, brown the onion until soft, not browned. Add ground beef and brown with the onions until beef turns brown. Add carrots, Marmite, tomato paste, bouillon, tomatoes, salt, and pepper. Simmer for 1/2 hour, and then place into a greased casser

Mash the potatoes with a little milk to make them soft. Place the mashed potatoes on top of the beef mixture and bake at 300º F for 15 minutes. Sprinkle some grated Parmesan cheese on top and broil until light brown.

Want to Grow Great Fruit? Get Rid of These Inheritance Spoilers.