OPEN THE PAGES OF ANY GREAT NOVEL AND ESCAPE INTO A WORLD FILLED WITH ENDLESS HEARTBREAK AND WORDS THAT HURT US.

Whether traveling up the Congo River with Charles Marlow (Heart of Darkness), imprisoned in the redroom with Jane Eyre, meeting Victor Frankenstein in the icy Arctic (Frankenstein), or fleeing from a royal ball before the clock strikes midnight (Cinderella), novelists give words to our deepest fears, our deepest longings, and our deepest desires.

Somehow, the power of story transcends time, culture and history and wields an immense, uncanny power and ability, unlike any other medium, to grab our hearts; giving voice to the voiceless, life to the lifeless, and hope to the hopeless.

But no story offers entrance into the world of relationships like the greatest story ever told, the Bible — full of romance, conflict, betrayal and the ultimate triumph of good over evil. For centuries, these true stories reveal the power of real love working out in the lives of real people.

A Tale of Two Hearts

Right when I needed it, I found a story in the Old Testament that literally changed my life. A profound statement, yes, but very true. I’ve held my Bible close to my heart for decades, but it seemed to really come alive during this time. They say desperate times call for desperate measures. I needed this ancient text to speak, and it did. Deeply wounded by the hurtful words of a close, trusted friend and fellow church leader, my desperate heart needed hope.

From a quiet, often-overlooked chapter, a voice of wisdom called out. First Samuel 1 tells the tale of two hearts. If the cameras of Reality TV had been rolling in 1083 B.C., these two women would have been catapulted into stardom, starring in “The Real Housewives of Ephraim” or perhaps guest stars on an episode of “Sister Wives.”

Meet Peninnah (whom I affectionately call “Penni”): the seeming antagonist.

Imagine the frenzy social media would have had with this juicy storyline. Hannah’s cover on People Magazine might read, “Poor Hannah. Unable to give her husband his beloved first-born son. Elkanah uses a surrogate to give him children.” Tweets might have read, “Motherhood is hopeless for Hannah. Bring on the next woman!” And if the shame of infertility wasn’t enough, Elkanah’s second wife, Peninnah, was not only fertile beyond fertile, she relentlessly flaunted her fertility success daily.

The Mystery of the “Mean or Well- Meaning” Question

We can do it too.

We aren’t given much to work with, only 28 verses, so I turned to theologians and Bible commentators who also tried to figure this relationship out. With intensity and a very strong desire to see every angle of this relationship, I looked at Penni’s side of the story because it is important to be open-minded, to gain insights from the other person’s perspective.

This contentious relationship begged the hard question, “Is this woman, Penni, well-meaning or just plain mean?” We can only discern the mystery of these two thoughts, mean or well-meaning, when we look at the words inside the words. Place them side-by-side and see how very different they are:

Small-minded [having narrow interests, sympathies or outlook — marked by pettiness, narrowness or meanness.”

What is an intention? An act or instance of determining mentally upon some action or result.

After careful consideration, I concluded, there was no sugar coating Penni’s unhealthy, hurtful presence in Hannah’s life. The evidence is clear, “Because the Lord had closed Hannah’s womb, her rival kept provoking her in order to irritate her” (1 Samuel 1:6).

Penni was “her rival.” She was not a nice person. None of us want to ever believe that someone is mean-spirited. We offer endless excuses for the mean behavior of others, sometimes at grave expense, desperately wanting to believe the best. But the truth of the matter, there are mean people in this world who hurt with their words. Sometimes we play a part in the scenario, sometimes we are just relational casualties.

What do we do, then, when we can’t escape or hide or get away from our antagonists? I believe Hannah’s responses to Penni’s relentless pounding shows us the hows, whys and whats of praying through and staying with all the perplexing pain of hurtful words.

In the midst of her very broken heart, Hannah had a decision to make:

• She could fight against Penni.

• She could be catty, i.e., deliberately hurtful in her remarks; spiteful.

• She could play the blame game and blame Penni for everything.

• She could gossip about Penni to the other women in her community.

• She could isolate herself and sink into a deep, dark hole of despair and possibly end it all.

• She could give it all up and run away from her life.

Instead, Hannah decided to do the one thing that changed everything. First Samuel 1:11 says it all. Hannah “was deeply distressed and prayed to the Lord.” Never before has the conjunction and meant so much. Leave it out of this sentence and it reads: “Hannah wept.” Add it back and voila! Hannah wept and prayed much. It seems Hannah had two choices before her: stay in “the weeping state” and stay stuck in sorrow, or find her way to “the praying through and staying with state” and rise above the pain; eventually experiencing freedom.

Standing on the threshold of 2019, we, too, face the same two choices. Hear Hannah calling back: “Do the one thing that changes everything! You’ll be so glad you did!” 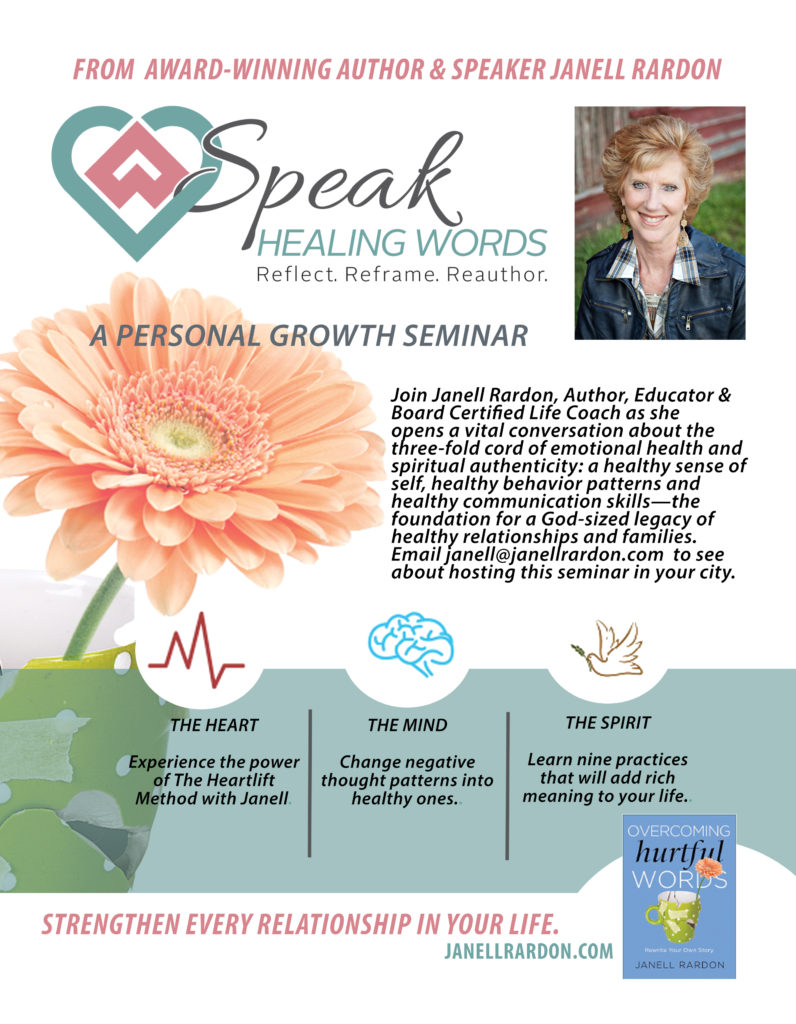 Tags: Do the One Thing that Changes Everything: Have You Given up the Words that Hurt You?, Janell Rardon, Leading Hearts Magazine

HOLLYN: In All Honesty

3 Disciplines to Help You OVERCOME Rejection