MEREDITH KENDALL HAS GONE THROUGH COUNTLESS STRUGGLES IN HER LIFE, from an alcoholic and abusive stepfather to having an affair. Today, Meredith uses her testimony to bring hope and healing to others.

Meredith never really knew God. Growing up in an abusive home, her family rarely went to church. In 1985, she became a teenage mother, married the baby’s father and moved to the Bible belt.

Her husband came from an extremely religious family, but neither of them had a relationship with God.

“We went to church, but it was really just something that you did on a Sunday,” says Meredith.

A few years into their marriage she had an affair. They were advised to talk about it and then never bring it up again.

Still, Meredith became active in the church because she felt like she needed to earn God’s forgiveness for everything that she had done. She became a camp counselor and helped with children’s choir and youth group, among many other things. “I could go to someone and have all the right answers for all the questions because I had learned them,” she says.

All of that changed during a sermon at a youth camp when the pastor asked, “If you were to die tonight, do you know for sure, for sure, that you would go to heaven?” He then brought up Matthew 7 which says, “And on that day many will say to me: but Lord.” This shook Meredith to her core. She realized that she was going to be one of those people saying, “but Lord, I taught Sunday school” or “but Lord, I sang in the choir.” She then fully accepted God into her life. Later, her husband truly did as well.

Me and God, Figuring It Out

Just because she had accepted Christ did not mean her struggles were over, though. Her husband had an affair with her best friend. They also dealt with bankruptcy and rebellious children. Meredith notes that statistically they should not still be married. “We should be divorced, but then there was God’s faithfulness,” says Meredith. “I didn’t go it alone this time though; it was just me and God figuring it out.” Through prayer, Meredith and her husband were able to work through these things and will be celebrating 34 years of marriage this year.

She realized that she was going to be one of those people saying, “but Lord, I taught Sunday school” or “but Lord, I sang in the choir.” She then fully accepted God into her life.

In 2003 they started a nonprofit called Advancing the Gospel which helps women who were caught in abuse and negative cycles in their lives find their God-given potential. They also co-authored a recovery program called the 180 Program. Now, Meredith can see how God’s faithfulness has helped her. “Looking back, I see God’s hand in a lot of stuff. I can say, ‘If this hadn’t happened, then I wouldn’t have been able to minister this way.’ I can look back and see how God has guided and directed me.”

Meredith now spends her time doing speaking engagements and weekend retreats. “The funny thing is that I actually quit speech in high school because there was a kid in the class who also went to a Sunday school that I rarely attended.” Again, Meredith felt ashamed and unworthy and quit the class because she was embarrassed to talk to him, but God has helped Meredith overcome that as well.

That is not to say that the work has always been easy.

“Satan used the very people I am trying to help to try to take me out,” Meredith says.

In 2011 Meredith was working with teenagers who were in something like a drug court. Meredith brought in others who had been in the drug world to show them the truth of what they were getting into. One day, she noticed a man standing by the center. She did not think anything of it, but she saw him again the next day.

After her class, she was getting into her car when he approached her and started to beat her. “I really believe that God sent something or somebody because as fast as it started was as fast as it ended,” Meredith remembers. The man took off like there was someone chasing him even though it was a quiet street.

Her orbital bone was broken, and she still has no feeling in one side of her face. Police officers and others believed that she was targeted as a warning to stop the work that she was doing. The man has still not been caught. “I had to choose forgiveness,” Meredith says, “I just want to know why.”

Meredith has not let this experience stop her; if anything, she is stronger than ever. “I think the biggest reason I want to be a speaker is to show God’s faithfulness.” Meredith wants to give others the steps to get through hardships.

“After you accept God, there is really no follow-up; there’s no what’s next,” she says.“How do you take what you’ve just done and apply it to the rest of your life?”

Meredith is currently working on a book called My Gigi’s House about a woman named Ralynn who runs away from an abusive relationship after promising God that she would seek help if He allowed her to see the light of day. She runs to, and then away from, the church because of shame and guilt after accidentally making a scene. She later meets Ms. Shelly, which sets her on a path of healing, a relationship with Jesus and purpose in her life.

After surviving so many hardships and struggles Meredith’s advice to others going through tough times is, “I can’t tell you it’s easy and I can’t tell you that you’re going to get the response that you want. But don’t blame yourself, but take responsibility for what you need to.” She wants people to block out the opinions of the world and rely on God. “Put on the armor of God, allow him to be the voice that you follow.” LH 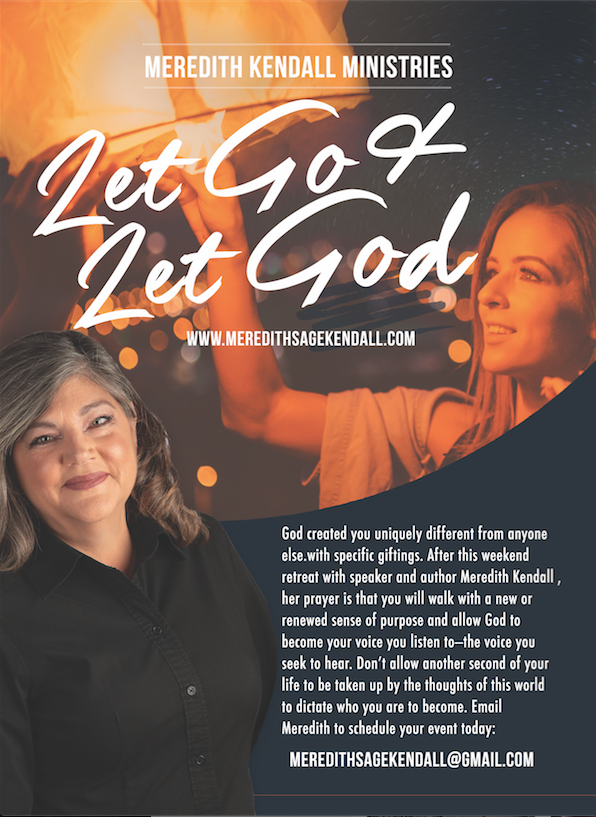 Does Your Perspective Need a Polish?