“BREAKTHROUGH” the movie is based on The Impossible book, written by Joyce Smith. The story documents the real death experience of her son John and the miracle of God that brought him back to life.

Leading Hearts magazine sat down to learn more of the inspirational story of the Smith Family, through their pastor and friend, Jason Noble.

On a winter day in January, Joyce Smith received the kind of phone call that every mother fears. Her 14-year-old son John and two of his friends had fallen through an icy lake. John spent 15 minutes under the ice before his body was found by an emergency search and rescue worker.

When the desperate mother arrived at the hospital she found that while the medical personnel had been doing their best for over 40 minutes, her son’s heart was not responding. With what appeared to be a tragedy, and in the middle of the critical care room with all medical staff listening, Joyce Smith did the only thing she knew to do at that moment… she cried out to God for the restoration and life of her son.

The Power of Prayer

Pastor Jason was by the family’s side from those first moments at the hospital. When he walked into John’s room, Joyce shared the Doctor’s grim report. John was considered to be brain dead. If John was to make it through the night…he would not be the John they had known before.

We live in a time when many people simply don’t believe in the power of prayer, much less in a God that does miracles.

Where do you go when you are given no earthly reason for hope?

What steps can we take to move forward in faith, believing in God even when we don’t see our desired outcome?

As followers of Christ, we embrace stories of miracles, and of heroes in the faith that have seen the miraculous come to pass. The question is, how do we live in that kind of faith today?

Pastor Jason says there are some important things to remember as we face life’s tragic moments. Having witnessed John’s journey, as well as a mother’s profound faith in God to do the impossible, Pastor Jason shares his insight from his Breakthrough journey:

Have an Eternity Mindset

“Perhaps we don’t always see more miracles because we’re not positioned for them. We walk in and see the dire situation. We hear what the doctors say will happen, and because of the devastation of the moment, we buy into it.

It was determined early on that we would not report what the doctors were saying, we would speak life over John, not death. Some may ask well isn’t that just a prosperity kind of teaching? No.

When you study healings in the Bible there is always a human conduit. Someone is speaking that healing out and praying for it. We have to pray in spite of what the outcome may be.

Let’s say John died in spite of our prayer… in reality, death is going to happen to each of us. Even for John Smith, healing at that moment in the hospital would only be a temporary thing. And if John had died in the hospital, we still need to maintain that healing occurs at that moment as he steps into eternity with a new body.

We need to pray for healing with an eternity mindset. We pray trusting God not knowing the outcome.”

Build Before the Storm

“Joyce taught me a very important aspect of the faith-filled life…You need to build up your faith and prayer life before the storm ever hits. Without knowing what was to come, Joyce had spent months studying scripture, learning to pray and drawing near to God. When tragedy happens you have a split second where you internally make a choice what to do. Joyce made the decision very quickly between, ‘okay, they say my son is going to die’, and, ‘okay! I will put this all into practice and pray’.

I think that’s the key.

You don’t build as the storm is raging. Build before the storm happens so that your foundation is set when difficulty comes. React by turning to God in prayer”

“We may be looking at our situation and thinking where is God? He’s not answering my prayers. I encourage people to go back and look at all the small things God has done while you are waiting for the BIG answer.

So many times God works in small pieces and ways, that all come together in this big tapestry of miracles. Faith helps us look at that and realize what He is doing. So keep that heart of gratitude, and your eyes wide open, while you are in the waiting.

“When our children or a situation needs intercession, it’s critical that we hang on. If you need more rope to hang onto, ask God for more rope and hold on.

Witnessing Joyce’s story, I can tell you the first miracle she encountered was incredible! I mean, when she walked into a room, prayed, and literally saw her son be brought back to life…that was just the beginning. There were so many more miracles that had to happen, even to the point of where we are at now, in telling the story on a movie screen!” 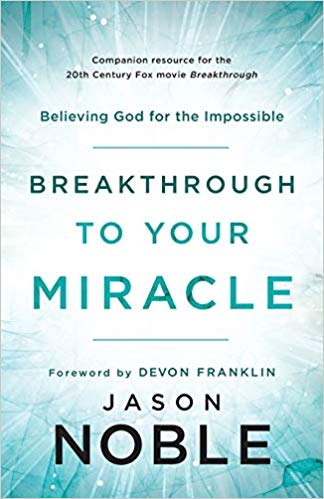 “Breakthrough”the Movie is showing now in now in theaters across the nation. Pastor Jason is a motivational speaker and continues to share the message that God does the impossible. He has written a companion resource for BREAKTHROUGH the movie called Breakthrough To Your Miracle- Believing God For the Impossible.

Are Your Free to Pray? 10 Myths that Might be Getting in Your Way

Touching Your Trauma to Write Your Story