The snow began falling on December 17. It was beautiful as it covered everything in a blanket of pristine white. The trees in the woods around our house looked as if God had sprinkled powdered sugar on them.

Yes, it was gorgeous, but the flakes continued to fall … and fall … and fall. The wet snow began to weigh down the branches of the trees, and soon loud cracks were heard as limbs started snapping.

We’d been through this before, so we knew there was a good chance that we’d be without power before too long. We quickly began our snowstorm prep, gathering lanterns and candles, and carrying firewood in so it would be dry. Sure enough, just as we finished our preparations, the power clicked off, and the cheery lights on our Christmas tree went dark.

The first day without power wasn’t too bad. Even the second day wasn’t too uncomfortable or dreary, but as day after day without power went by, our spirits began to droop. By this time, the food in the refrigerator and freezer had thawed and spoiled, and food choices were becoming more and more limited.

All of us were a bit aggravated. We had places to go and things to do. After seven days without power, I called our electric company on the morning of

Christmas Eve to see if they had any idea when everything would be back to normal. The news from the other end of the phone was not what I wanted to hear as the employee said it would likely be at least three more days.

Three days? That meant we’d have to cancel our Christmas plans. There’d be no opening gifts by the light of the Christmas tree and no big family holiday meal.

I was devastated. This was our first grandchild’s first Christmas. I’d had such big plans for our family. When a friend from my speaker’s group called to check on us, I asked her to send a message to our prayer loop to pray that the lights would come back on soon. She said she’d do that right away. I started getting phone calls from those dear ladies, telling me they were praying.

Forty-five minutes after that prayer request went out, I heard something unusual. I opened the front door so I could listen, and then I realized it was the sound of big truck engines. Moments later, a stream of trucks from our electric company drove through the neighborhood, and an hour later, we had power again.

We had just enough time to get to the grocery store before it closed, and we returned home with a ham and everything else we needed for our big family Christmas dinner.

And that night, as our loved ones gathered and we enjoyed our beautifully-lit tree in a warm house, I looked around the room with tears in my eyes—grateful beyond words for the Christmas when prayer turned the lights back on.

When God Calls the Heart at Christmas — Heartfelt Devotions from Hope Valley, by Brian Bird and Michelle Cox, is inspired by the Hallmark series, “When Calls the Heart.” 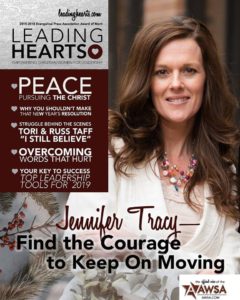 To get this issue of Leading Hearts FREE text LEADINGHEARTS to 64600.

Stop the Arguing! — Plus Holiday Recipe for Cranberry and Meatball Baguettes